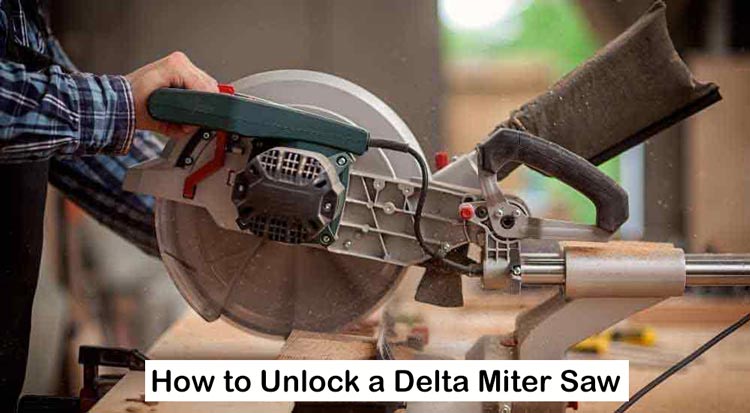 HOW TO UNLOCK A DELTA MITER SAW SAFELY LIKE A PRO

A Delta Miter saw is a heavy-power tool that contains a wide variety of applications. It is portable that can be set up in a few minutes into a convenient package. As woodworkers prefer to carry their miter saw in different places, manufacturers design locks to facilitate easy moving of the miter saw. Knowing how to unlock a delta miter saw will help you ease the use. Also, it will prevent any unwanted injuries. Check out this article, and you will learn how to unlock it safely like a pro.

Most delta miter saws feature two locks to keep the saw safe and accurate. The front lock controls angles while the lock-in back directs the up and down movement of the blade.  Not only beginners but also pro users often face difficulties unlocking their miter delta miter saws.

How To Unlock a Delta Miter Saw – Step by step

The process of how to unlock a delta miter saw is not that much complicated and pretty straightforward. However, due to the difference in the model, you might follow a few steps to unlock your delta miter saw. So let’s jump into the process directly:

Put some pressure on the miter saw and find a pin, key, lever, or anything similar to a moving part. Some miter saws have knobs, while others have a lever designed to hold some parts together. Besides, a few modern models have a lever to block the mechanical ankle.

Usually, you will find the knob at the blade’s right back near the middle section of the main base. Pull and remove the lever out in order to unlock the head. For the sliding model, a lock is placed in the back, which must be detached.

After unlocking the head, this is time to open the table or base. Nowadays, modern units contain a visible knob joined into the table as it allows you to move the base to find the accurate angle you are searching for.

Moreover, the latest models come with the most used angles such as 45 and 90 degrees to increase users’ convenience. Align the swiveling part of the base with the static one containing preset angle positions rather than using different methods of figuring out the right angle.

Moving bevel does not come with every model. This step is only required for the users who have a model containing an angle. However, the latest model of miter saws has a tilting bevel feature including, so you might own one.

Firstly, slide the integrated stop placed near the base to regulate and fine-tune the tilt. Manufacturers have designed holes to preset to a certain angle and to block the head from inclining further. Some units have 45 and 90 degrees angles on the base as these angles are commonly used to adjust the miter saw without facing hassle.

Whenever the saw is not in use, the blade remaining in the down position keeps the saw secured for transporting and carrying. The lock consists of only one lock. The upper part of the blade is covered by the guard. The lower body of the blade or the teeth is carefully inserted below the table as well as locked in the back with the blade pivots.

A knob and pin control the lock. Pulling or pushing the knob on the end of the pin results in locking or releasing the blade. Generally, the knob requires twisting inwards, outward movement of the pin; however, it depends on the model.

While rotating, the edge should elevate automatically, and the guard should cover the blade. If you don’t see the blade lifting, it’s most probably dirty and needs cleaning to move freely with the blade.

There are two locks on the front of the saw for controlling the angles. The vast, horizontal, and knurled knob fasten the smooth side-to-side swivel action of the blade. A key beneath the knob interlocks and unleashes preset for joint angles.

Some models contain the lever or key on top instead of placing it underneath the knob. The placement does not affect the lock. Again, some models of compound miter saws have the feature in front.

This type of lock is typically used in slide miter saws which can change the blade’s cutting angle. To unlock the left-to-right swivel action of the blade, just rotate the knurled knob anticlockwise.

Unlocking this preset angle lock is extremely easy because the lever is the secret behind unlocking it. First, lower the miter saw’s key to release the preset angle. Then, use your middle or index finger to hold on to it as it is spring-loaded.

When depressing the key, swivel the handle simultaneously so that you can adjust the angle. Do not rotate at any time to adapt angles or use the lever to preset notches. Whenever the lever passes over the preset angles, you will hear a click. You have to loosen the lever to fasten the presets. Now rotate the knurled knob clockwise when the angle is set to lock it in place.

A Delta miter saw is crucial and valuable equipment. That’s why a user should not neglect compulsory safety precautions. Otherwise, they will damage their machines or end up hurting themselves severely.

Got any questions to ask? Then have a check at these questions carefully to know the answers.

No, the handle of the delta miter saw and its knobs contain hard plastic instead of rubber. For this, you don’t have to worry about the rubbers replacing them from time to time. Besides, hard plastic will provide you flexible grip.

Yes, the Delta miter saw comes with one blade while purchasing, but you can buy more if you want. Also, as new blades can fit with it, you can buy a better blade with more teeth.

Unlocking a delta miter saw is not a big deal; however, it is essential to know what you should do in every step. After reading this article, we hope that you have learned how to unlock a delta miter saw in-depth. Once you have understood the steps correctly, you can avoid significant risks of being hurt or damage your miter saw.

Besides, read the manual thoroughly before start working with your machine. The manual contains brief instructions so that you can get to know about some basic knowledge. Do not hesitate to take any professional help if you get stuck.

Hello, I am devid jhon from California, I have 12 years experience in power tools and gardening equipment. This is my personal blog, before writing an article I was fully researching about article topic and it's equipment, so I ensure my visitors, you can easily trust my articles.